What is the definition of a team role?

A Belbin ‘Team Role’ is one of nine clusters of behavioural qualities identified as useful in facilitating team success by Dr Meredith Belbin’s research at Henley.

“The types of behaviour in which people engage are infinite. But the range of useful behaviours, which make an effective contribution to team performance, is finite. These behaviours are grouped into a set number of related clusters, to which the term ‘Team Role’ is applied.”Meredith Belbin | Team Roles at Work

The most successful teams, according to the research, had a wide mix of behaviors. To become a high-performing team, each team must have access to all nine Belbin Team Role behaviors.

What are the nine roles that make up the Belbin Team?

The nine Belbin Team Roles are: Resource Investigator, Teamworker and Co-ordinator (the Social roles); Plant, Monitor Evaluator and Specialist (the Thinking roles), and Shaper, Implementer and Completer Finisher (the Action or Task roles).

How can I determine the strengths and limitations of my Belbin Team Role?

Taking the official Belbin® Self-Perception Inventory online and receiving a Belbin® Individual Report is the only method to find out your Belbin® Team Role strengths and limitations. Then, utilizing the Observer Assessment, we propose that you seek input from persons you work with. This provides you with an updated Belbin Individual Report that reveals which Team Role activities others notice and value.

Belbin® Reports for people, managers, teams, and organizations have been generated in excess of 3 million times around the world. To begin your Belbin® adventure, contact us here. 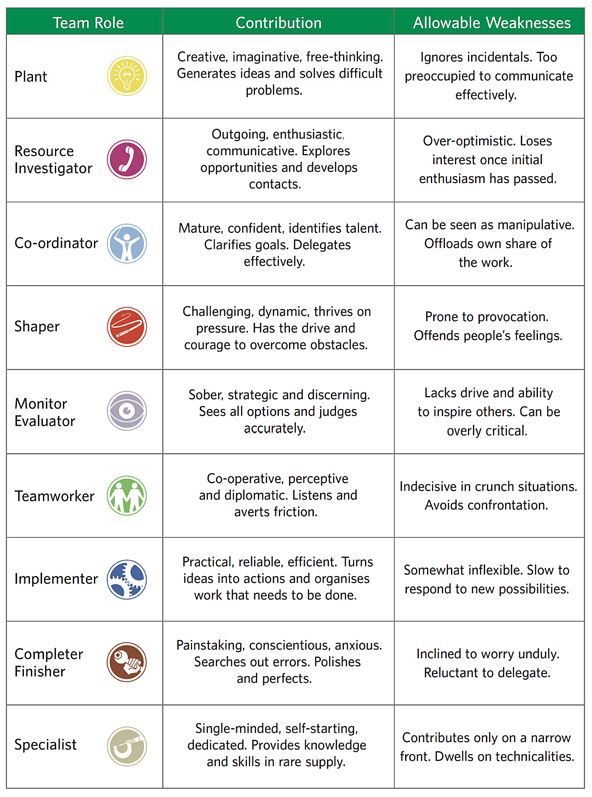 Benefits of Team Building for Your Organization